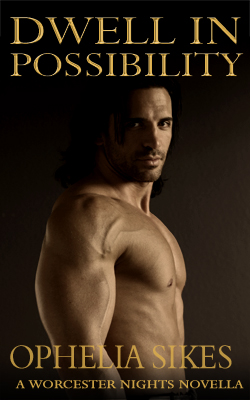 Dwell in Possibility
Kate's life sucks. She's tending bar at a run-down dive. Her immoral boss fondles every co-ed within reach. The clientele is made up of TV-glazed zombies, drunkards, and ... who is that in the corner?

She hadn't thought it was real. But when she looks into Sean's eyes, the force of the connection staggers her. Her mind desperately seeks to pull her back - he's an ex-felon. Far too talented with those rippled muscles and toned fists. He's everything she should be staying away from.

She craves him from the depths of her soul.

His touch smolders her skin; his fingers expose her to worlds she never dreamt existed.

But when his secret is ripped free from the dark shadows, their lives teeter on the brink of destruction.

Half of all author's proceeds of this novella benefit battered women's shelters.

Dwell in Possibility is the first of four novellas in the Worcester Nights series. Due to the strong sexual content and adult situations, this romantic suspense story is recommended for readers aged 17+. The first three novellas have cliff-hanger endings, which lead to the final novella with a happily-ever-after.

Ophelia adores Worcester, Massachusetts with all its gritty streets, rows of muted-colored three-deckers, and tough-as-nails can-do attitude. She’s lived in this area since college, with only a few brief flings in other locations. No matter where else she travels, the powerful allure of Worcester pulls her home again. Worcester's a mere hour west of Boston, with many of the same traditions of Irish culture and fierce pride.

Get Dwell in Possibility FREE on Amazon.com

Here are the rest of the books in this series:

Bookmark this site so you can reference it any time you need Massachusetts info in the future!

"You must live in the present, launch yourself on every wave, find your eternity in each moment. "ť